Is now a good time to admit that it took me almost a year to use my Instant Pot? Amazon Deal be damned, I... 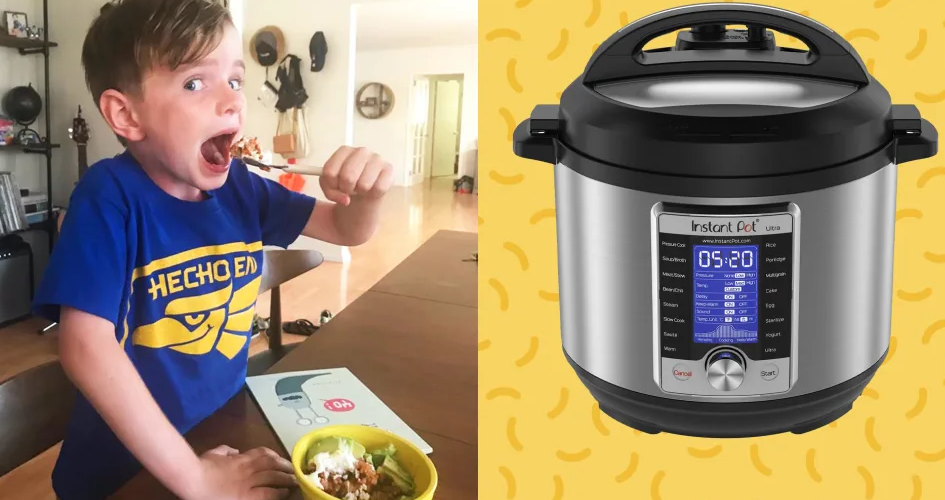 Is now a good time to admit that it took me almost a year to use my Instant Pot? Amazon Deal be damned, I jumped on the bandwagon and then stared, terrified, at the beast I had purchased for almost nine months after that; apparently, I’m not alone. For the past few months I’ve been cautiously tinkering with it, but with the start of the new school year I looked at this as an opportunity to both wrangle with my kitchen demons and get my picky child to eat more adventurous meals that he could then take to school in his lunchbox.

Out of the gate, I was faced with two major challenges: First, my child doesn’t eat anything. I like to say that he prefers to subsist on a diet of air and ice chips, but that’s unfair: He also likes French fries and Goldfish crackers. He also declared himself a vegetarian about a year ago and talks to anyone so much as looking at a sausage as though he was the youngest spokesperson ever recruited for PETA. My husband, on the other hand wants really filling, protein-heavy meals. Mealtimes are frustrating because there is no happy food-medium that anyone can agree on. Things had to change, and conquering the Instant Pot was my first step in getting meals under control in my house.

I decided to go big right out of the gate. While I wasn’t sure if our son would like this Instant Pot meal, its stellar reviews insured that my husband and I would at least be okay with eating a few days worth of leftovers if it was met with our kid’s rejection. I first started hearing people really go crazy about the Instant Pot after they tried the now famous Butter Chicken recipe from the Two Sleevers cooking blog. The Instant Pot really lends itself to Indian recipes and cuts the time down on the slow-cooking methods that tend to be so essential to that type of cuisine. I tried the meat-based version of the recipe about a year ago and loved it, but needed it to be vegetarian for my son. Enter soy curls! Two Sleevers recommends this brand of soy curls for the vegetarian version of butter chicken; we were ready to take the plunge.

Easiness: 8/10. This is basically a dump and cook recipe, but you do need to be present to quick release the steam and you need to make your rice on the side.
Kid-friendly tweaks: I cut out the cayenne and let adults add it to taste and I added a little bit of plain Greek yogurt at the end to up the creaminess for palates that need a bit more convincing to try something new.
Kid Rating: 10/10 He ate it for lunch at school and THEN for dinner as well. He even did a happy dance and gave this dish a literal thumbs-up between chews. I never thought I’d see my kid eat food with any sort of exotic flavors. I nearly cried. I feel like I should write a thank you letter to this blog.

Day one was a major coup, but I’ve been to war before when trying to get my kid to eat something new. I wanted to pace things a bit to avoid a revolt. One of our son’s favorite meals is pasta with pre-made pesto. For us, this recipe was a fresh and more complex spin on an old stand-by. I was intrigued by the idea of having pasta be part of a one-pot dinner. The novelty of not watching a timer, skipping the pasta firmness-test, AND skipping the draining step was all too exciting for me; I was all in. I was also interested to see if my son would eat the added mushrooms, spinach, and peas—three foods he swears he hates—if they were swimming in delicious pesto and cream cheese.

Easiness: 8/10. Beyond a bit of sautéing and stirring, this is an incredibly easy recipe. An added bonus was the pasta turned out perfectly al dente. The timing on this recipe is superb and I’m going to steal it when I experiment with other pasta dishes in the IP. Also, it introduced me to Better than Boullion’s Roasted Garlic Base, which is a major find for all vegetarian cooks. It adds more depth than most store-bought vegetarian bases and adds a coveted edge of umami, which is so hard to achieve when you’re cooking without meat. Vegetarian cooks should buy it immediately and use it in place of vegetable broth whenever they want to add more depth to their cooking.
Kid-friendly tweaks: Chop the mushrooms into tiny ¼-inch pieces and brown them in butter, to give them a more kid-friendly texture. Roughly chop the spinach to avoid the inevitable whines that accompany eating any sort of leafy vegetables.
Kid Rating: 9/10 He liked it so much that he had already eaten over two-thirds of the meal before he remembered he didn’t like peas and started pushing them aside. He noticed the creaminess from the cream cheese and said he loved it!

This is a great alternative to vegetarian chili, which my son complains is “too soupy” and “has too much stuff in it.” While my son loves beans, I’ve never been able to pull off getting him to eat any sort of bean and rice recipe—a challenge when I’m trying to make a dinner that will satisfy the whole family. Since he’s starting to reach the age where he understands what “Mommy is not a short-order cook” means, this recipe seemed like a great option that would satisfy his love for legumes while also making for a filling family meal.

Easiness: 10/10. I loved the set-it-and-forget-it-vibe of this recipe. It’s a dump-and-go technique which not only does not require any sort of attention, it prohibits stirring (mom swoon)! In terms of ease, this one goes to eleven. In terms of versatility, this can be eaten as a main dish with a dollop of sour cream and some sliced avocados, it can be used as a filling for enchiladas, or it can be a side dish.
Kid-friendly tweaks: Because my kid will use “spiciness” as an excuse not to eat anything, I replaced the can of enchilada sauce with half a can of mild enchilada sauce, half a can of tomato sauce, and a teaspoon of smoked paprika. I think the recipe might have been fine with just mild enchilada sauce; next time I make it I’ll try it out. I also plan to throw in a little bit of frozen corn for the next go around.
Kid Rating: 10/10. My child ate every bit of this for lunch and also loved it at dinner the next day. He liked it so much he ran his finger around the the rim of his dinner bowl to get the last of it—maybe not the best etiquette, but it an excellent endorsement for a meal that’s going to be on constant rotation at my house going forward.

After three days of unequivocal success, I pushed my luck—and I failed. There are lots of vegetarian bolognese pastas out there, but it was absolutely crucial to me that this be a one-pot dish that didn’t require me to boil a separate pot of pasta. When I saw this recipe was adapted from one by Giada De Laurentiis, I was sold. This was easy to make, but it wasn’t a winner. In spite of the abundance of mushrooms, it was missing a meaty texture and savory flavor and it was too sweet overall. The Porcini mushrooms didn’t add anything beyond an additional $10 to my grocery tab. Next time I’ll skip the pricey Porcini and just add some well-salted and sautéed Crimini. If you’re dedicated to making a vegetarian bolognese, some diced eggplant and porcini powder might help things along. Sadly, this one just didn’t work out for anyone in my family.

Ease: 6/10. There’s a lot of chopping, but after the chopping is done it’s a fairly easy recipe. The recipe calls for 12 oz of pasta, but most boxes come as 16 oz, so I had to get out the scale, which felt like an unnecessary step. I got the burn message on the IP; that issue was thoughtfully and thoroughly addressed on the blog, but there is a little bit of trial and error for your first go-around with this recipe.
Kid-friendly tweaks: I left out the red pepper flakes, but adults will definitely want them. Have them handy.
Kid Rating: 2/10. Tomato-based pasta dishes tend to be iffy with most kids and mine is no different. His lunch box came home untouched. At dinner he tried two bites but I just couldn’t convince him to push on and finish his dinner. My husband and I also found this dish to be bland and think it could use a lot of adjustments before it becomes something we’d crave.

Make the Rigatoni Bolognese from Paint the Kitchen Red

What could be easier than boxed Mac & Cheese? It’s the simple go-to, but there is always an underlying sense of guilt that accompanies feeding my child reconstituted cheese. I wasn’t ready to give up my quickie lunch in a box, but if this recipe was to be believed, it was almost as quick to pull this together—and with less time checking in on a boiling pot. Prep time: 5 mins. Cook time: 5 mins. Total time: 10 mins. DONE! This is what Friday school lunches are about. I tossed everything in, put on my makeup, came back for the quick release, and got dressed. By the time I was finished getting dressed lunch was done and ready to be spooned into my son’s bento box.

Since we were trying for full vegetarian, we used more of the garlic bouillon in place of the chicken bouillon, which is my new favorite way to add a savory finish to vegetarian dishes.

Ease: 9/10. This couldn’t be any easier and is 100 percent worry-free, attention-free cooking. I had to measure out a bit more stuff than I would with boxed mac & cheese, but the cooking of it requires far less attention than the boxed version—and the flavor is 1000 percent better!
Kid-friendly tweak: Serve the hot sauce on the side for the adults and big kids.
Kid-rating: 7/10. As of a few weeks ago, my son claims he doesn’t like mac & cheese. He ate a pretty substantial amount of this, however, before he remembered he was supposed to hate it. If your kid does, indeed, like mac & cheese, this is going to be a winner.

Make the Instant Pot Mac and Cheese from The Salty Marshmallow

After five days of Instant Pot lunches, I am on a roll and I have no intention of stopping. Over the weekend I tried this steel cut oats recipe and a breakfast quinoa recipe—both to resounding success. I’ve also already made the Vegetarian Butter Chicken recipe a second time and plan to have a few of the other recipes on regular rotation.

Nothing can beat recipes that allow you to dump things in and barely check on them when you are chasing a child or listening to their countless stories. The Instant Pot bought me a lot of time where I was able to do other, more worthwhile things (like building a Lego Millenium Falcon with my kid), rather than watching a stove and stirring a pot. If you’re considering taking the IP plunge, I say do it.