THE BEST PORTABLE PHOTO PRINTERS OF 2019

While most of our photographs now reside comfortably inside our smartphones or live in the cloud via social media or online storage sites, it’s... 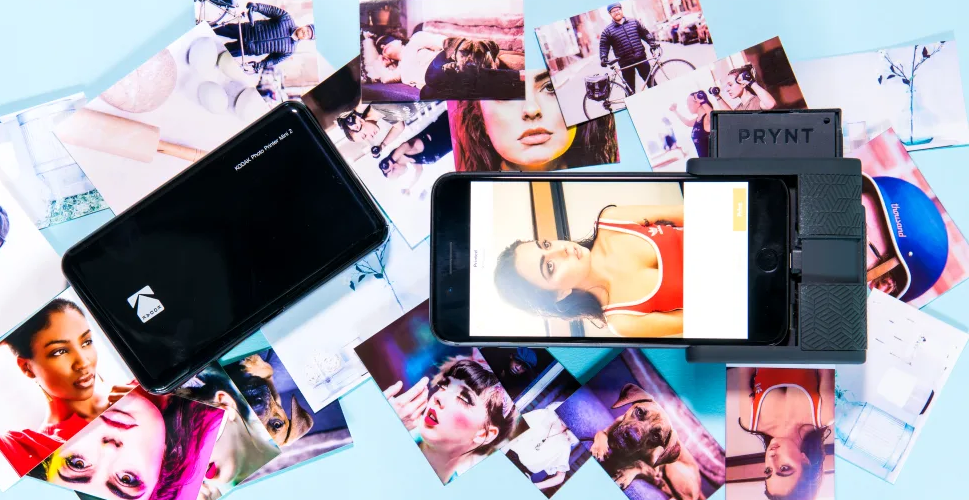 While most of our photographs now reside comfortably inside our smartphones or live in the cloud via social media or online storage sites, it’s still nice to have a physical photo you can hang on the refrigerator or put in a photo album. Many options exist for printing photos—from large multifunction printers to laser printers to kiosks at the pharmacy, but there’s a third printing option that can produce great images on the go with lightning quick print speeds.

After testing, we found that the Prynt Pocket (available at Amazon for $65.00) is the best portable photo printer offering high-quality images and the best portability. However, if the printer’s mobility and size are less important to you, we discovered that the Canon Selphy CP1300 creates even better quality prints.

Most of the new printers are so small that they can fit in your hand. They produce smaller prints—2×3-inches rather than the standard 4×6-inch or 5×7-inch prints you see on a desktop printer.

For today’s cell phone using, selfie-obsessed population, the smaller prints are meant to be shared with friends rather than placed in a photo album. Most of the prints include a sticker backing, so you can stick them to a wall, inside a locker, or other non-adult location. In addition, you can add things like borders, text, and funny stickers—just like you would with Instagram or Snapchat. My kids got mad when I wanted to just print a plain photo. The downside to these tiny printers is that they’re unable to do many of the things that we expect full-sized printers to do: document printing with both black and white and color ink, handle wide-format photos or create scans and copies.

Our list of printers to choose from came down to six models from Canon, HP, Kodak, Polaroid, and Prynt. We included two printers that produce 4×6-inch images since they’re still smaller than the standard-size photo printers.

These are the best small photo printers we tested ranked, in order:

The Prynt Pocket looks like a stout miniature docking station for your smartphone, but instead of giving the phone extra battery life, it will print photos which come out from its side (about 90 degrees from the direction of your smartphone). The main benefit of this direct connection from the phone to the printer is an increase in speed. Other mobile printers we tested required a Bluetooth connection, which slowed down the printing process.

The Prynt produced high quality color photos, and even better black-and-white images, although some of the other printers we tested produced better images. But the speed and portability of the Prynt Pocket put this at the top of our list for printing photos.

The company recently launched an unlimited paper subscription plan if you really like printing photos –for $35 every two months, you get an unlimited supply of paper. When the paper supply gets low, the app notifies the company to send you more. If you don’t like that plan, you can buy packs with 20, 40, or 60 prints.

Right now, Prynt is only compatible with the iPhone, but the company has begun accepting pre-orders via a Kickstarter for an Android version.

I’m Keith Shaw, and I’ve reviewed consumer technology products for more than 15 years, including several photo printers both large and small. I still own a scrapbook filled with some really bad instant photos I took as a child—the beauty of today’s technology is that you can retake photos with your phone before printing them.

We tested each printer with two smartphones—an iOS iPhone 7 and Google Pixel 2 (Android) by printing both color and black-and-white photos. The phones and printers were connected via Bluetooth. For each test, we noted how long each print took, using up as much photo paper as provided (usually the starter packs had about 10 prints).

We attempted to print the same photos for each of the printers tested, but in some cases, we needed to print different photos. For example, when printing an image with sticker options or borders, it had to print from that vendor’s app—not all borders and stickers are the same across printers. After all 10 images were printed, we had several judges look at the images and choose their favorites for photo quality.

As part of the test, we tried two models (a Canon and Kodak) that could produce 4×6-inch prints, but what you gain in image size, you lose in portability. All of the really small printers would print images with a smartphone app (connecting to the printers via Bluetooth), but the two larger models could also connect to a Wi-Fi network or print via storage device (SD memory card or USB stick).

How does a portable photo printer work?

There are a number of different technologies used to print photos, some of the more common ones being inkjet and laser printers, although portable photo printers (without ink) are on the rise.

So how does it print without using an ink cartridge? The secret is the connection between the camera and your WiFi network through a USB adapter wire. This allows the printer and the camera to connect virtually. If your phone is compatible with the printer it will be able to send image data via radio waves, resulting in a color photo with a peel off back and tons of decorating options.

Portable photo printers are predictably much smaller than an Inkjet or Laser printer and are convenient for creating instant hard copy images. Without ink cartridges, the maintenance on these printers is also half of the upkeep for a traditional photo printer.

But a portable wifi photo printer may not be the best option for every buyer. For larger and well-defined prints an inkjet printer may be better suited to your purposes. And if you’re printing in bulk for a large office, a laser printer is definitely the way to go.

Inkjet printers are the most common type of printers used. They come in a wide variety of different shapes, sizes, and prices. The advantage of an inkjet printer is that it is quieter than other models and it is capable of printing in extreme detail. Inkjet printers recreate a digital image using two methods, continuous inkjet and drop on demand. y

Piezoelectric DOD: uses piezoelectric material in an ink-filled chamber behind each nozzle, which changes shape and creates pressure, forcing the ink from the nozzle.

The majority of portable photo printers use the Zink (Zero-Ink) method to transfer photos from your social media accounts into hard copy. The Zink method, developed by Zink Holdings and licensed to printer makers, prints your images in a single pass onto thermal paper. The Kodak and Canon printers we reviewed, however, do use dye sublimation cartridges, which also don’t require separate ink canisters.

Other Portable Photo Printers We Tested

This small unit doesn’t use the ZINK system, but rather relies on a small dye sublimation ribbon cartridge, similar to the Canon Selphy printer, but at a smaller size. It prints 2×3-inch images and connects to smartphones via Bluetooth or near-field communication (NFC) technology. Kodak sells the ribbon and paper in bundles of 20, 30, and 50 sheets.

In our tests, it produced the best quality images of all the smaller printers, but this quality came at the price of speed—the printer was a lot slower compared with the others we tested. In some cases, the app stalled when processing a photo or sending it to the printer. We also enjoyed the apps from the other printers more than the Kodak app.

If you’re older than 30, the photos produced by the Fujifilm Instax Share will remind you of Polaroid instant cameras from the 1970s and 1980s. Photos print somewhat quickly, in general under a minute, and its quality for colors was pretty good. Like some other modern portable photo printers, this mobile printer doesn’t require ink. Instead, it uses special paper and film that you buy separately.

The app features Instagram-like filter options for modifying the images, such as changing something to black-and-white or sepia tone, or if you choose the “Intelligence filter,” it will automatically adjust the image to the best possible quality. Unfortunately, the app lacks features that let you do more with your prints, like add fun borders or draw onto the image like with other apps/prints.

It’s not surprising that the company that invented instant photo printing also has a mobile photo printer. What surprised us was how average the prints looked. The 2x3inch prints looked darker or flatter than those from the Kodak or Prynt device. Polaroid sells ZINK paper in packs of 20, 30, or 50 prints.

Like the Kodak Mini 2, we experienced some stalls during the photo processing portion of printing, requiring us to restart the app and try again. Battery life was also an issue – the printer required a recharge before we could print our 10th photo—it felt like the printer would last longer than just nine photos before needing more power.

On the plus side, the Polaroid app was fun to use—it was very intuitive and let us add fun things like borders, stickers and other designs to our photos before printing.

The HP Sprocket looks almost exactly like the Polaroid ZIP model—it would be hard to tell them apart if you didn’t see the company’s logo on the printer. Since both use the ZINK paper system, they have the same loading procedure, and in theory, the same photo quality.

The difference between HP and Polaroid came down to the apps—the HP was a bit more difficult to use than the Polaroid app. However, HP required a firmware update that also gave me additional borders and stickers to use. We didn’t experience any photo stalls and most of our photos printed in about a minute. Regarding image quality, however, there were better options from the other printers we tested.

The color and black-and-white prints produced by the CP1300 were outstanding. If you’re willing to sacrifice some portability to print 4×6-inch images of higher quality, this unit is worth a look. In our tests, it out-performed the Prynt Pocket in every category except portability.

It’s still much smaller than a standard desktop photo printer or multifunction unit, but it requires a power outlet, which means you won’t be able to print photos while hiking or boating. (Although Canon now offers a bundled printer and battery, which we did not test.)

This printer doesn’t use the ZINK system for printing, instead choosing a cartridge style that can produce a limited number of photos before it needs to be replaced. One cartridge produces all of the color images, so you don’t need to buy separate cyan, magenta, yellow, and black, like for a regular printer.

The CP1300 can connect to your Wi-Fi network or print from an SD memory card or USB memory stick. One downside—there’s no app to print from your phone, so you would need to transfer those images to a memory card or your computer before printing.

This printer, which prints 4×6-inch photos, also requires a power source. It’s more likely to sit on your desk or an end table rather than inside a backpack. A cool feature of this printer is its ability to dock your smartphone—similar to the Prynt Pocket, but without the portability.

Like the Mini 2, this model uses the dye sublimation ribbon cartridge when printing photos, and you can connect to a Wi-Fi network if you want to print images from a computer instead of a phone.

Two things doomed this printer—first, our photos took a long time to print, the longest of all those tested. Second, we were unhappy with the Kodak app to print the photos. Similar to the Mini 2, it stalled a few times when trying to print, which shouldn’t have happened since the phone was directly connected to the printer.